“Maybe you shouldn’t live in Texas…,”

It is a phrase which, over the years, has been visited upon me with a dogged regularity.

There are, of course, phrases which turn up more often in debate.  But while a less frequent visitor than that old standby, “The Bible says…,” I find it infinitely more offensive.  At least I know that if someone wants to use the Bible, the Constitution, or even the freaking ‘Daily Shopper’ to debate me, they are engaged in the conversation.

“Maybe you shouldn’t live in Texas…,” is neither argument nor plea.

It is a dismissal.

Excuse me, I’ve gotten ahead of myself.

Allow me to explain…, 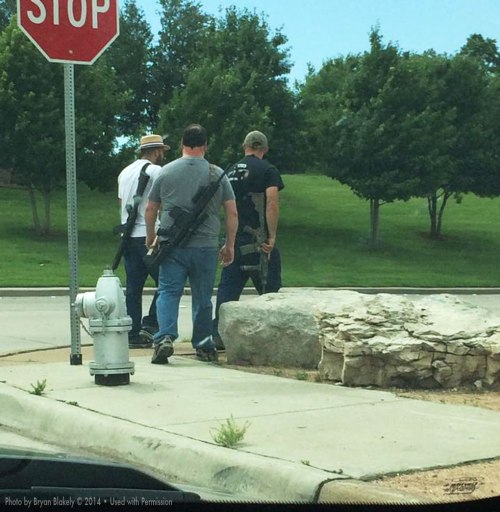 The above photo was taken by one of my coworkers on Memorial Day and posted to his Facebook page.  You may have seen other photos like it in the news recently.  It shows members of an ‘Open Carry’ group casually strolling around Fort Worth, with assault rifles strapped to their backs.

The purported goal of these guys, and a handful of folks like them, is to demonstrate their 2nd Amendment right to stand about awkwardly, like extras in a ‘zombie attack’ movie, while making innocent passers-by incredibly nervous.

Maybe their goal is to desensitize the public to the presence of ridiculously large weapons in the public sphere, thus reassuring us all, that if some crazy starts shooting indiscriminately into the crowd, there will be good upstanding folks there, more than willing to catch you in the crossfire.

Or…, maybe it was something else.  It’s hard to say.  If you watch the videos that these guys take of themselves, it seems as if they just crave attention, only to react belligerently when they get it.

In any case, back on Facebook, a lively debate sprang up regarding the demonstration.  Was it a brave display of constitutional goodness?  Or, was it a totally unnecessary display, in callouss disregard of recent tragedies?

The conversation was moving along as politely as one could hope for, given the topic (although, in the spirit of full disclosure, I ‘did’ suggest that there might be some disproportionality between gun and penis size among the demonstrators) when one of the participants dropped that familiar old cliché…,

“You know, Texas probably isn’t the state to live in if you are so opposed to the gun laws.”

If you don’t like gun fetishists walking the streets…,

…or organized Christian prayer in our schools…,

…or our laid-back attitude toward executions…,

…or the way we treat the disadvantaged…,

If you believe mixing religion and government is unconstitutional…,

…that women should have control of their bodies…,

…that same-sex couples should have the same rights we do…,

…that the place of public schools is to teach science, not scripture…,

…and that there is more to our relationship with the land than seeing how many dollars we can dredge out of it…,

Well then maybe, just maybe, you shouldn’t live in Texas. 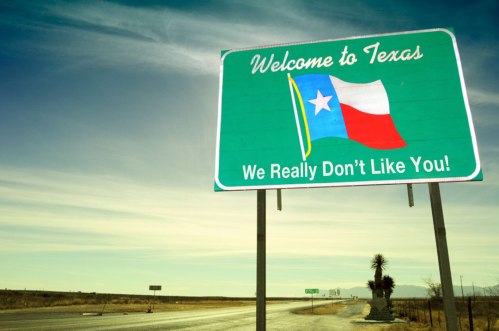 “Political progressives,” I have been told on more than one occasion, “have no place in this state.”

“So you’re not christian?  Why do you want to live here?”

“Wouldn’t you be happier someplace where the people think like you?”

And maybe I would.

Maybe we should all just congregate ourselves into enclaves of likemindedness where we never have to encounter an opinion that differs from our own.

It’s an attractive idea on some levels, and one that I have heard bandied about more than once among my fellow reconstructionist pagans.  Imagine, having our own polytheist communities, set apart from all the dogmatic ballyhoo and funny looks we deal with on a daily basis.  Think of something along the lines of Amish country, but without the eschewing of technology and a wider array of fashion choices.  It would be our own little pastoral, techno, pagan, paradise, where no one need pretend to be something they are not.

Barring that, there ARE places that are friendlier to folks like me.

And I didn’t choose Texas, after all.  My parents did that when I was but a child.

Over the years, dear friends have beckoned me to the mountains of Colorado.

More recently, it has been the coasts and the forests of Washington state that have called to me.

And then there is Ireland, so distant, and yet every time I have visited, the land and the people have felt more like home than any other I have ever known.

Why not give ‘them’ what they want and just leave?

Well, I have family here, of course.  And there are my friends as well.  And lets not forget the mortgage, the half-finished remodeling project, a job, a hungry cat, remarkably little monetary savings, and an entirely reasonable fear of failure.

There is also, I must confess, a certain amount of determination to make THIS place better.  I want to contribute to a positive change, and the thought of leaving to find a better fit somewhere else just sounds like retreat.

Maybe I shouldn’t live in Texas, but that’s for me to decide.

Let’s have this conversation again in a couple months when we’ll be suffering through our latest string of 100-degree days.  I may be thinking more clearly by then.

Let me know what you think Cancel reply